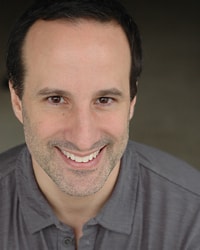 DAN TRIANDIFLOU (Harold) played Ellard in The Foreigner his last time at Theatrical Outfit which earned him a Suzi Bass nomination. More recently, he was Peter Danforth in the Aurora’s production of I’m Not Rappaport. Over the last few years, he has performed at The Alliance Theatre in One Flew Over the Cuckoo’s Nest, By the Way, Meet Vera Stark and It’s A Wonderful Laugh (The Hertz Stage). Dan regularly portrays Benji on the Adult Swim show You’re Pretty Face is Going to Hell. We could go on and on here but you get the idea. The one thing that keeps him grounded in the cosmos and on his toes is his amazing son, Henry. Special thanks to…oh,everyone. We’re all great!