R. BUCKMINSTER FULLER: THE HISTORY (AND MYSTERY) OF THE UNIVERSE

Hop onboard a captivating quest chronicling the Leonardo da Vinci of the twentieth century in this unconventional one-man show blending multimedia, poetry and humanist humor. Can humankind sustain itself on Earth, and if so, how? Do we have the courage to reinvent ourselves? So ponders R. Buckminster Fuller – engineer, environmentalist, futurist, poet, philosopher and inventor of the geodesic dome. A visionary who foretold many of today’s challenges, Bucky teaches us to save the planet by doing more with less. Meet the mesmerizing man behind the world-saving mission.

R. Buckminster Fuller: The History (and Mystery) of the Universe was developed and received its world premiere production at San Diego Repertory Theatre—March 31, 2000.

“Extraordinary … a whirlwind of impassioned ideas!” — The Boston Herald 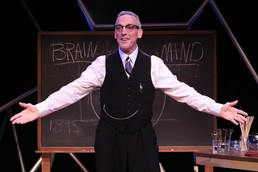 Written by
D.W. Jacobs from the life, work and writings of R. Buckminster Fuller