THE HUNCHBACK OF NOTRE DAME

at The Rialto Center for the Arts at Georgia State University- September 7-17, 2017
BUY TICKETS

Brought to you by the Atlanta producing partners of Memphis and In the Heights.

1482.  Paris, France. Quasimodo, a deformed bell ringer in a cold, cathedral tower discovers his inner strength. A conflicted priest, Frollo, battles the specter of damnation. Phoebus, a dashing soldier shuns duty to pursue Esmeralda, a beautiful Gypsy dancer. And at every turn, a malevolent force propels each of them toward fate. This musical retelling of the beloved medieval love story features a lush score by Alan Menken (Disney’s The Little Mermaid, Beauty and the Beast) and lyrics by Stephen Schwartz (Wicked, Pippin) — the only stage collaboration between the two giants of the American musical theatre.

“At its heart, The Hunchback of Notre Dame is a story of faith: a faith in something bigger than us, and the faith that we are something bigger. When the fire of our life burns away the given circumstances of socio-economic status, ethnicity, gender, creed, handicap and hardship, we are just people … people who long for love, acceptance, and wholeness. In times like these that seem so unclear, I can’t think of a better hope-filled story to pierce through the darkness and remind us of that truth.”

Strobe lights and stage smoke will be used during this production.

2 hours 30 minutes with one 15 minutes intermission. 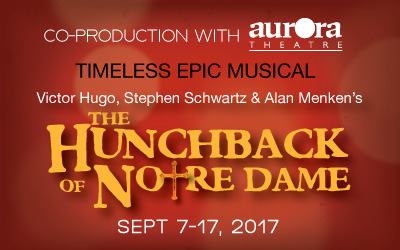 Macy’s Page to Stage Post-Show Talk Back
Friday, September 15
Representatives from the creative team/staff share how they moved the show from script to finished production!