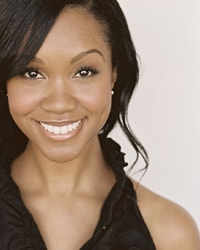 MARLISS AMIEA (Nina 4) is thrilled to be making her debut on the Theatrical outfit stage. She was last seen as “Sharmaine” in Da’Kink in MY Hair at Horizon Theatre and can be seen in the upcoming movie A Question of Faith as Lisa Pearl. She studied at Berklee College of Music and Jacksonville University where she received her BFA in Musical Theatre. Notable stage credits: Disney’s When You Wish (Tuacahn), Sister Act (Tuacahn) ,The Lion King (Broadway National Tour), Aida as Aida (Village Theatre), Hairspray (3D Theatricals), Beauty and the Beast (Music Theatre West), and Ragtime (3DTheatricals). Television/Film: “Rake”, “The Young and the Restless”, “Curb Your Enthusiasm”, “Ben and Kate” & “Hollywood Heights” to name a few. Marliss has been seen in numerous Lifetime, Hallmark and Ion original movies. For more information go to: MissMarliss.com. Follow on Twitter & Instagram @MissMarliss