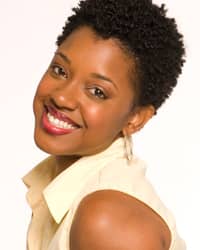 Naima Carter Russell (Jenny Hill) is an Atlanta resident and Florida State Alumnus. A Suzi Bass Award winner for Aurora Theatre/Theatrical Outfit’sMemphis and a nominee for her role in Aurora Theatre’s Tranced, she was also seen in Aurora’s Lark Eden, A Year with Frog and Toad and Christmas Canteen. Other regional credits include:  The Nacirema Society Requests… and Christmas Carol (Alliance Theatre); Antigone (Georgia Shakespeare), Caroline, or Change (St. Louis Black Rep), Rejoice (True Colors Theatre Company), Godspell (Theatrical Outfit). Commercial/Film/TV credits include: Westwood College, House of Payne, Let’s Stay Together. Naima is also seen weekly in churches across the nation as a regular in the reTHINK Group’s videos. Naima would like to thank the cast and the Aurora family for letting her be a mom AND an actress. Naima is “Acting, Crafting and Raising a Baby” on www.itsthedramamama.com.