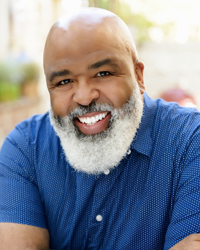 ROBERT JOHN CONNOR (George/ H.C. Understudy) actor, singer and award-winning director, has worked in arts and entertainment for over 30 years. A graduate of Morehouse College, Robert studied music, radio, film and television. He has appeared in a variety of stage productions including: Once on This Island (Georgia Ensemble Theatre); Camelot (Aurora Theatre); Crowns (P-G Entertainment); The Club (Ethel Woolson Lab/Alliance); Urinetown (Fabrifaction); Queen of the Blues, Higher Ground (Jomandi Productions).   Some of his film and television credits include: “Greenleaf”; “A Different World”; “The Cosby Show”; “Glory”; and “Showtime at the Apollo”. As a musician Robert has recorded and arranged vocals for a variety of artists, jingles for national and international products and has sung with a variety of artists including: Michael Buble, Gladys Knight, Barry Manilow, Byron Cage and Cassi Davis. Robert holds a MFA in Performance and Dramatic Media from the University of Georgia.  Robert dedicates this performance to his daughter Ryan.