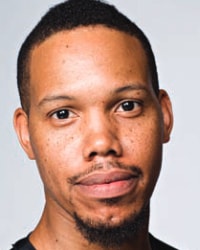 ROBERT MASON II (Ensemble) started dancing later in his life but was quickly fastened to the training regiment and expectation thereof. After his initial start with Spirit Wings Dance Company in Maryland, Robert attended The Atlanta Ballet and The Ailey School on Full Scholarship to continue in his training. While at Atlanta Ballet, Robert worked alongside company members and directors in such works as Romeo and Juliet, The Nutcracker and 1001 Nights. As a dancerat the Ailey School, Robert was a member of the Student Performance Company and performed in such memorable works as Memoria and Stack Up. During this time, Robert also pursued his Musical Theatre ambitions appearing in Black Nativity and Dream Girls, produced by Jamandi Productions. Soon after, Mr. Mason began to cho-reograph recognizable works such as Hunger, 9th Ward, and Asylum—a full-length ballet. After completing the national tour of The Color Purple, he settled in Atlanta with his wife and created City Gate Dance Theater, a contemporary ballet company and ballet cinema group.