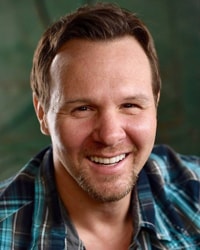 Travis Smith (Edward Bloom) is a graduate of The North Carolina School of the Arts and has performed all over the country. Atlanta theatre credits include: Ghost Brothers of Darkland County, The Tall Girls and Bull Durham the Musical (Alliance Theatre), As You Like It, Much Ado About Nothing, The Glass Menagerie (GA Shakespeare), Memphis, Going With Jenny, Godspell, Lost Highway (Theatrical Outfit) Of Mice and Men, Hamlet the Musical, Hamlet (Shakespeare Tavern)Smoke on the Mountain, Sanders Christmas And Homecoming (Theater in The Square). Film and television credits: Shotgun Stories, Ring of Fire andThe Good Lie. Guest star appearances in AMC’s “Halt and Catch Fire” and as quarterback Rex Evans in USA Network’s “Necessary Roughness.”