Told through a series of theatrical “snapshots”, this riveting one-woman narrative thrills and inspires as recounted by one of Atlanta’s most electrifying performance poets.Each story written in the style of performance poetry captures memories of youth in her native country, the violent exit, first impressions of America, and the transitions from girl to woman, and from stranger to American.

The play explores the conflicting nature of these transitions, the emotional landscape of coming of age in the process, and the price of reinventing oneself away from everything familiar and dear.

As an emigrant Beqo worked as a seamstress while studying to become a costume designer. In Harabel, the real elements of the sewing machine, the manikins, and the sewing tools are used as the metaphors that cut and patch together the story. They are “the other characters” in this ever shifting landscape. The play weaves the multicolored threads of this girl’s journey from the war-torn Balkans of the late 1990s to the rural and urban South of today into a breathtaking tapestry of courage, hope, faith and love. 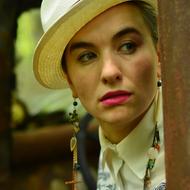