Part magic act, part musical, part puppet show, this world premiere with early songs by Emmy, Grammy, Oscar and Tony-winner Robert Lopez, tells the story of Mysterioso the Magician and his curious child Bastienne who, through an epic separation and reunion, learn to see each other in a truer, hope-filled light. A Balladeer sings delightful tunes that paint a comic and fantastical world inhabited by a beckoning handkerchief, an otherworldly suitcase, magical creatures and one gigantic, ravenous rabbit. A unique hybrid theatrical extravaganza, The Dancing Handkerchief will mesmerize patrons small and tall.

* Member of Actors’ Equity, the Union of Professional Actors and Stage Managers in the United States 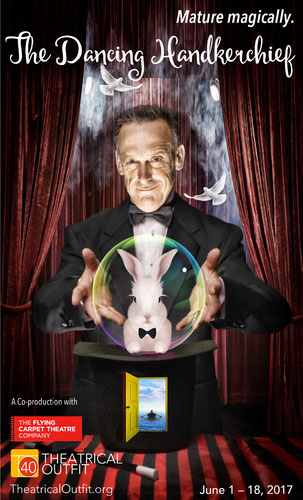 Music and Lyrics by
Robert Lopez

Downtown Dialogue – Post-Matinee
Saturday, June 10
Be downtown and join a panel of special, non-theatre guests in an open dialogue about the social and global themes in the show! Open to all patrons with a ticket to any performance of the current production. Dialogue begins after a short break following the matinee and lasts one hour.

Macy’s Page to Stage Post-Show Talk Back
Friday, June 16
Representatives from the creative team/staff share how they moved the show from script to finished production!