Part Of MADE IN ATLANTA

Theatrical Outfit is home to MADE IN ATLANTA – a new work development program with the goal to create a place in the heart of downtown for artists to tell Atlanta’s stories. One of the stages of MADE IN ATLANTA is workshops and readings that will focus on developing stories about Atlanta and the South; nurturing powerful new voices; and building national partnerships that will enrich our theatre and our community. 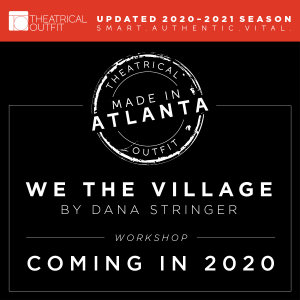 A Week-Long Workshop Coming In Fall 2020

In late 90s Atlanta, a popular drag queen named Frankie and his twelve-year-old, latchkey neighbor, Redd, form a special bond. When Redd’s mother becomes suspicious of their relationship, accusations and threats are made, provoking Frankie to abruptly end the friendship and move away. Twenty years later, Redd finds Frankie again and their reunion proves to be something they both need. A popular part of TO’s 2020 Unexpected Play Festival, Dana Stringer’s heartfelt play takes an earnest and funny look at unconditional love and acceptance.

Be the first to know about productions, special events, promotions, and everything happening at TO!