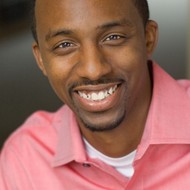 Eric J. Little is an actor, teacher, director, and writer. Having received his education from Alabama A&M University (Secondary Education) and Louisiana State University (MFA in Acting), he has acted on professional stages across Atlanta, as well as in New York and Louisiana. He is a proud member of Actors Equity Association, the union for professional theatre artists. His Film/TV work includes “Tyler Perry’s House of Payne,” “Necessary Roughness,” “The Clubhouse- (Pilot)”, “The Know Better Effect- (Pilot),” “Hamlet’s Ghost,” “Lottery Ticket,” the lead in two short films “Perfect Day” and “A Beautiful Death,” and also various commercials. Eric had the privilege of traveling to the 2012 Cannes Film Festival in France, where he was a part of the Creative Mind in Cannes Program. He was the lead in two short films that won 2nd and 3rd prizes in the competition. Eric’s been nominated for Five Suzi Awards (the professional theatre awards in Atlanta), and the winner of one -2011 Suzi Award Winner Lead Actor for “Superior Donuts”- Horizon Theatre Company. He has also been recognized as one of the “25 Rising Stars” by Atlanta Tribune Magazine, called “The Talent to Watch” by Creative Loafing, and awarded “Best Supporting Actor” by The Sunday Paper. He has been privileged to work with Kenny Leon, Jasmine Guy, TC Carson, Mo’Nique, James Pickens, Jr. and Samuel L. Jackson. He also worked at Riverdale High School where he taught English and drama and co-wrote and directed a musical “Love and Freedom.” At Riverdale, he was also awarded “Teacher of the Month.” Eric is currently an Adjunct Professor at Clark Atlanta University where he teaches acting and where he has directed a production of “for black boys who have considered homicide when the streets were too much,” “Before It Hits Home,” and “The Brothers Size.” He is an Imaginator at Imagine It! The Children’s Museum of Atlanta. At the museum he is a performer and has also written, choreographed, and directed plays there. Eric was formerly the drama director for Heard Home School Academy, where he wrote and directed plays. For 5 years, Eric has been proud to serve as the Artistic Director of the EBC Players Drama Ministry at Elizabeth Baptist Church, where he has directed three full plays as well as various scenes for various conferences and services. Eric’s future projects include Film/TV projects, continuing working on directing/writing projects with Elizabeth Baptist and Clark Atlanta, working on a one man show, as well as continuing to be a part of Atlanta’s theatre community.