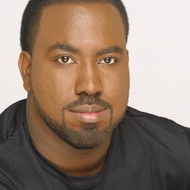 Eric Moore is an Atlanta, Georgia native.  His is an accomplished vocalist and actor.  Eric began professionally singing in 1986 and has worked extensively as a vocalist, musical director, songwriter, and music producer.  His style is versatile and can blend into traditional, contemporary, jazz, holy hip-hop and bluegrass.  Eric began his professional acting career in 1995 by landing a role in Theatrical Outfit’s musical production of “Cotton Patch Gospel” directed by Tom Key. This production would be the first of many productions in Eric’s career.