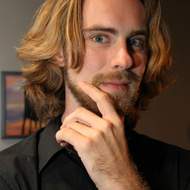 Jeff Millsaps received a B.I.S. in Theatre from Georgia State University and has worked in various capacities with several companies around town, including the Aurora, the Atlanta Lyric, Capitol City Opera, and True Colors. He also has a background in amusement parks, having served as a Technical Lead at Stone Mountain Park. Since 2009, Jeff has worked with Theatrical Outfit as a Carpenter, Electrician, Audio Engineer, and Sound Designer before becoming the Production Manager in 2015.